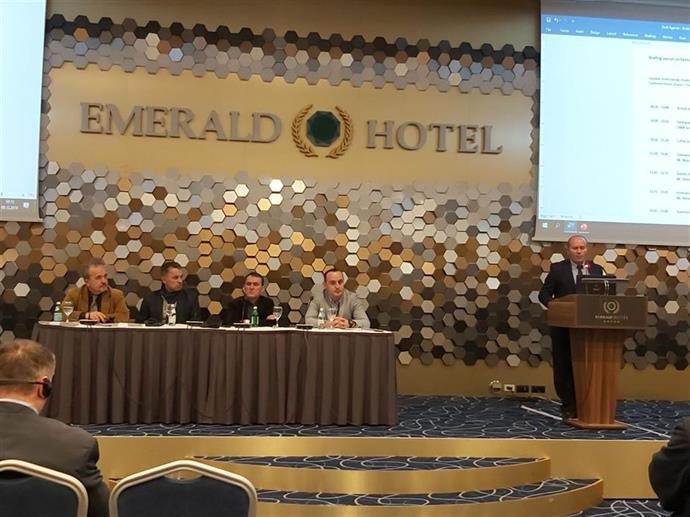 Created on 12/10/2020
General Director of the Emergency Management Agency AME MPBAP Mr. Fadil Kodra received in a working meeting Mr. V. Minister of MPBAP Mr. Bajram Gecaj, where in a meeting accompanied by the leading staff of the Agency Mr. Kodra informed Deputy. Minister Mr. Gecaj on the mission, mandate, role and responsibilities of AME in general and the current tasks and responsibilities in the situation created by the announcement of the Pandemic caused by COVID-19.

Among other things, issues were specified which specify the mandate and responsibilities of AME and those specific to the situation, where the Director General informed the Deputy. Minister Gecaj with the requests made by him.

Consequently, knowing that AME is a reliable executive institution where with the delegation and expertise of staff we have managed to contribute substantially to the establishment of government mechanisms and continuous contribution to those mechanisms, such as:

Representation and contribution in the Committee of the Kosovo Institute for Public Health NIPHK with the recommendation of the AME expert approved the declaration of the state of Public Health Emergency, in the Minister of Health MoH with participation and recommendation for initiating, establishing and activating the Operational Center QO of the Ministry of Health MoH as well as staff training for QO MoH, and recently, the proposal for Activation of the National Response Plan PRK, the establishment of the Inter-Institutional Incident Management Group GNMI, Activation and staffing of the Operational Center of the Ministry of Internal Affairs and Public Administration QO MPBAP and the placement of AME staff in functions of responsibility within it for the coordination of the situation created at the State level by COVID -19.

Also, knowing that the mandate of AME is the implementation of tasks and responsibilities in coordinating support for local institutions and first responders, the activation of Municipal Committees for Protection and Rescue and situation management at the local level have been initiated, as well as the coordination of government level support for the municipal level through Emergency Operational Centers QOE 112 in the country.

Deputy. At the end of the meeting, Minister Gecaj expressed his satisfaction to get acquainted with the Emergency Management Agency, its mission and practical mandate in the current situation, where, among other things, he concluded that for AME the reasons for delays in support of the EU should be reviewed. past.