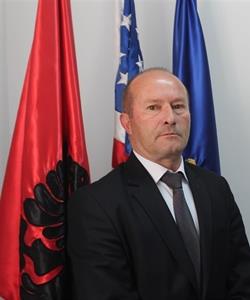 Director of the Emergency Management Agency

Born on 19.11.1965 in the village of Prekaz, Municipality of Skenderaj. He completed primary school in his hometown and high school at the Technical School "Anton Qeta" in Skenderaj. In 2006 he completed his studies at the University of Prishtina, Faculty of Education. In 2011 he completed his Master’s studies at the International University of Struga where he received the title of Master of Economic Sciences. He has a long experience in the field of military and security, where he has served in several leading positions. He is one of the founders of the first KLA cells. After the end of the war, he was appointed Head of the Intelligence Department (G2) at the KPC General Staff with the rank of Brigadier General. Following the transformation of the KPC, he was appointed Director of the Emergency Department within the Ministry of Internal Affairs. In 2010 he was elected Chief Executive Officer of the Emergency Management Agency. While from 2017 he holds the position of General Director in the Emergency Management Agency.

During his professional career, he has attended a number of training in the field of security and military, including: